TO THE NEXT LEVEL

No other shark fishing charter in the State fishes like we do! Captain Ben is a proven shark tournament winner that catches Shark on LIGHT TACKLE! The offshore waters of Maine hold several species of sharks. Blue sharks are the most common. Thresher sharks, porbeagle sharks, and the acrobatic mako shark are all within the reach of the Kristin K in the deep sea waters of Maine.

Blue sharks saturate the waters in the later months of summer. Blue sharks average 7-12 feet in length and can weigh over 300 pounds.

Mako sharks are extremely fun to catch. It is not uncommon for mako sharks to soar up to 15 feet in the air several times during the battle.

Thresher sharks have a tail as long as their body. Like Makos, They will break the surface of the water several times. They are also incredible fighters!!

We take great pride in our participation with the NMFS tagging program. We release 99% of all the sharks caught on the boat. The NMFS tagging program helps biologists track the habits of these magnificent creatures. Kristin K. Charters have had sharks recovered off the coast of South America, Spain, and the Canary Islands. Book now so we can help you land your next shark this season. 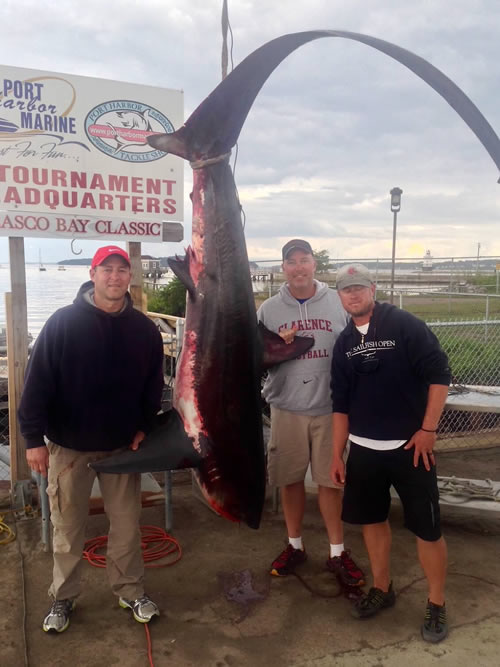 WHAT YOU CAN CATCH

Click or tap the other activities here to learn more about them.

Captain Ben is a family man himself. Which is why he offers a low-cost 2 hour family fun trip that is great for fishing with little ones and beginners!

Light tackle inshore fishing trips are available in 4 and 6 hour options. Because inshore is closer to land it means quicker access to fish.

Not much of an angler? Just want to see ocean life, landmarks and maybe a sunset with a glass of champagne? Captain Ben is happy to oblidge!